Slovenia has been dubbed many things – “Europe in Miniature”, “The Sunny Side of the Alps”, “The Green Piece of Europe” – and they’re all true. The country abounds in top-notch attractions – the stunning Julian Alps, beautiful Lake Bled and tranquil Lake Bohinj, the Kras underground caves of Postojna, and its lovely sliver of the Adriatic Sea around Piran. Add cities like Ljubljana and historic towns like Ptuj – both with unsurpassed architecture, museums and a unique energy of their own – and you indeed have a cross-section of Europe.

Slovenia at a glance:

Pakistan’s Honorary Consulate was formally opened in Slovenia Jan 7,2015, to promote cultural, economic and commercial ties between Pakistan and Slovenia.

In 2006, the Bled Strategic Forum (BSF) was launched with a vision to bring together decision-makers from different fields, to encourage open debate on contemporary political, security and development challenges, and to search for new ideas and solutions. 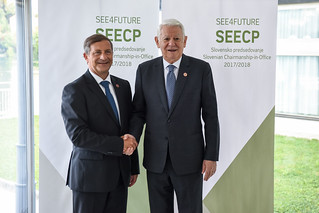 In all the years since, we have had the privilege of meeting many new friends and partners and have built new relationships in many different fields. The complex and interdisciplinary challenges of today’s globalised world require comprehensive solutions, which the BSF and its participants have never been afraid of bringing up and discussing. As such, the BSF gives a voice to differing positions, views and understandings of the topics that require the attention of the wider international community.

Ljubljana (Slovene: [ljuˈbljàːna] ( listen),[5] locally also: [luˈblàːna]; also known by other, historical names) is the capitaland largest city of Slovenia.[6][7] It has been the cultural, educational, economic, political, and administrative center of independent Slovenia since 1991. Its central geographic location within Slovenia, transport connections, concentration of industry, scientific and research institutions, and cultural tradition are contributing factors to its leading position.

During antiquity, a Roman city called Emona stood in the area.[8] Ljubljana itself was first mentioned in the first half of the 12th century. It was under Habsburg rule from the Middle Ages until the dissolution of the Austro-Hungarian Empire in 1918. Situated at the middle of a trade route between the northern Adriatic Sea and the Danube region, it was the historical capital of Carniola,[9] a Slovene-inhabited part of the Habsburg Monarchy.[6]

Slovenia is the first country in the world to be declared a green destination based on the Green Destinations Criteria. Situated in the heart of Europe, Slovenia is a boutique country between the Alps, Mediterranean Sea, mysterious Karst with more than 11,000 karst caves and Pannonian Plain, rich in healthy water springs. We are also proud that our capital Ljubljana was awarded the European Green Capital 2016 title. Welcome to Slovenia, the only country with the word LOVE in its name!

Slovenia offers tourists a wide variety of landscapes: Alpine in the northwest, Mediterranean in the southwest, Pannonian in the northeast, and Dinaric in the southeast. They roughly correspond to the traditional regions of Slovenia, based on the former four Habsburg crown lands (Carniola, Carinthia, Styria, and the Littoral). Each offers its own natural, geographic, architectural, and cultural features. Slovenia has mountains, meadows, lakes, caves, and the sea, making it an attractive destination in Europe.[1]

The nation’s capital, Ljubljana, has many important Baroque and Art Nouveau buildings, with several important works of the native born architect Jože Plečnik. Other attractions include the Julian Alps with picturesque Lake Bled and the Soča Valley, as well as the nation’s highest peak, Mount Triglav. Perhaps even more famous is Slovenia’s karst named after the Karst Plateau in the Slovenian Littoral. More than 28 million visitors have visited Postojna Cave, while a 15-minute ride from it are Škocjan Caves, a UNESCO World Heritage Site. Several other caves are open to public, including the Vilenica Cave.

Slovenia is a land of healthy water. Its thermal and mineral springs are a source of health and well-being. Choose which thermal spa you wish to visit in the green surroundings of the Pannonian Plain, the Karst Region, the Alps, or the Mediterranean. Healing treatment. Preventive treatment. Wellness. Selfness. You.

Slovenia today is a developed country that enjoys prosperity and stability as well as a GDP per capita by purchase power parity at 83% of the EU28 average in 2015, which is the same as in 2014 and 2 percentage points higher than in 2013.[13] Nominal GDP in 2015 was 38.570 mio EUR, nominal GDP per capita (GDP/pc) in 2015 was EUR 18,693. The highest GDP/pc was in central Slovenia, where capital city Ljubljana is located, which is part of the Western Slovenia statistical region, which has a higher GDP/pc than eastern Slovenia.[14]

It was the first new member of the European Union to adopt the euro as a currency in January 2007 and it has been a member of the Organisation for Economic Co-operation and Development since 2010.[15]

Slovenia has a highly educated workforce, well-developed infrastructure, and is situated at a major transport crossroad.[15] On the other hand, the level of foreign direct investment is one of the lowest but has been steadily rising in the last few years. Slovenian economy has been severely hurt by the European economic crisis, which started in late 2000s.[15] After 2013 GDP per capita is rising again.[16] Almost two thirds of the working population are employed in services.[8]

At home and abroad, Slovenian companies have celebrated numerous successful and highly innovative products. Ever heard of Elan skis , the ones used by skiing champions? Or Seaway sailing boats and Pipistrel ultra light aircraft ? Or perhaps the brilliantly designed Gorenje household appliances ? And numerous other small, but highly innovative companies. Their products are persistently breaking into foreign markets and lends a boutique-type quality to Slovenia’s economy.

The economy is geared towards services, and Slovenia can boast top-class services in the field of information technology. It also has developed pharmaceutical and automobile manufacturing.

Port of Koper (Slovene: Luka Koper, Italian: Porto di Capodistria) is a public limited company, which provides port and logistics services in the only Slovenian port, in Koper. It is situated in the northern part of the Adriatic Sea, connecting mainly markets of Central and Southeast Europe with the Mediterranean Sea and Far East. Differently from other European ports, which are managed by port authorities, the activities of Port of Koper comprise the management of the free zone area, the management of the port area and the role of terminal operator.

Terminals of the port

The Port of Koper has 12 specialized terminals:

The core business covers cargo handling and warehousing services for all types of goods, complemented by a range of additional services for cargo with the aim of providing a comprehensive logistics support for customers. The company manages the commercial zone and provides for the development and maintenance of port infrastructure.